The University of Granada (UGR) and the IFMIF-DONES España Consortium have strengthened their scientific-technical collaboration with CERN (European Centre for Nuclear Research or European Laboratory for Elementary Particle Physics). They will work on joint projects from now on.

A Spanish delegation made up of representatives from both institutions today visited the CERN facilities in Geneva (Switzerland), and signed an agreement to strengthen collaboration between institutions in technical and scientific matters.

The University of Granada was represented by the Rector Pilar Aranda, the Vice-Rector for Research and Transfer, Enrique Herrera, and the Vice-Rector for Teaching and Research Staff, Fernando Cornet, and the IFMIF-DONES España Consortium, by its Director Angel Ibarra and the Accelerator Systems Coordinator, Ivan Podadera.

This morning they all visited CERN, the most critical basic research laboratory in the world today, which was created in 1954 in Geneva and currently has 22 member states, including Spain.

In addition to the visit to the facilities where the large experiments of the LHC and the accelerator tunnel are carried out, they have taken advantage of the day to formalise the collaborations between the University of Granada, IFMIF-DONES Spain and CERN, with the signing of a letter of intent between all the institutions.

For its part, CERN was represented by Mike Lamont, Director of Accelerators and Technologies, and José Miguel Jiménez, Head of the CERN Technologies Department. 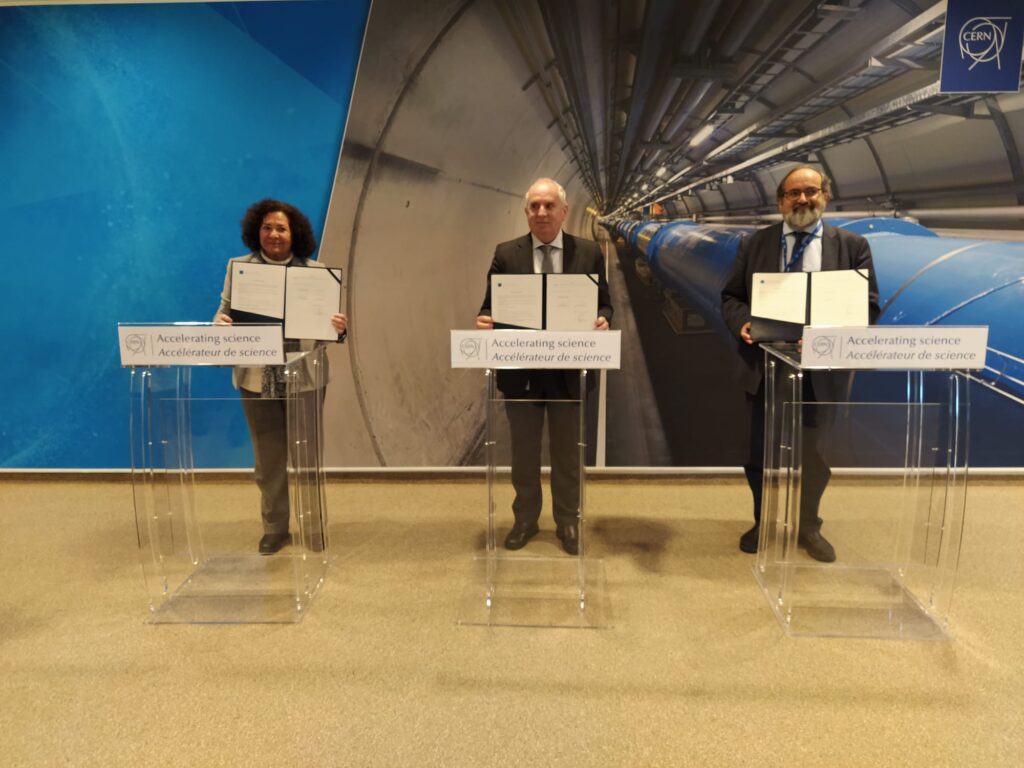 It should be noted that there has been an ongoing collaboration in basic research and accelerator-related technologies between Spain and CERN for many years. Still, this agreement serves to recognise the need to strengthen this collaboration, taking into account the implementation of IFMIF-DONES in Granada.

Specifically, the UGR and IFMIF-DONES will collaborate with CERN in research and development related to high-power accelerator technologies such as vacuum, cryogenics, beam diagnostics, radiofrequency, ion sources, superconducting cavities, magnet technology, auxiliaries, RFQ, transport lines, beam dumps and liquid targets or control and synchronisation systems; training of personnel for the development or operation of facilities at the Grenada and Geneva sites, and research and development related to nuclear physics and materials experiments and any other projects on either side related to technologies of common interest.

In this way, the University of Granada, IFMIF-DONES España and CERN reinforce their collaboration by fostering knowledge exchange between institutions.

As a sign of this strengthening of relations, the members of the Spanish delegation have taken advantage of the day to hold some working meetings to explore the implementation of some joint work in some of the lines described above.